Skip to content
The building of Castle Carrock reservoir 1903-1909

The building of Castle Carrock reservoir 1903-1909

The construction of Castle Carrock reservoir

“The ceremony of formally opening the Castle Carrock Reservoir was performed yesterday by the Mayor of Carlisle, Mr W B Maxwell. The event marked the completion of the greatest undertaking upon which the city of Carlisle has embarked.

Those who, at the invitation of the Mayor, witnessed the opening ceremony yesterday, must have felt pleased that the city’s water should have been drawn from so free, open and bracing a countryside; and, as they gazed on the immense reservoir which has converted the Castle Carrock valley into a lake, they could rest assured as to the adequacy as well as to the purity of the supply.”

In the summer of 2008, I bumped into a small leaflet about the fells above Castle Carrock where I live. It happened to mention that on July 22nd, 1909, a brand new reservoir had been opened in the village. 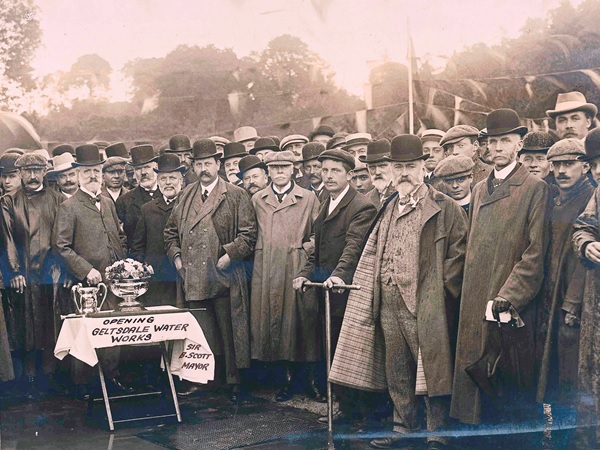 I realised that 2009, therefore, was going to be the centenary for this great event. And so began a year’s work for me, exploring and researching why and how the reservoir was built where it was. How it was filled up. How it worked. And who built it. I was lucky enough to find, in Carlisle Library, two beautiful hardback A4 sized diaries kept by one of the engineers of the project. He also happened to have been quite a good amateur photographer. So. That’s why I know this story – the Reservoir story – as told below (with two of my poems too). 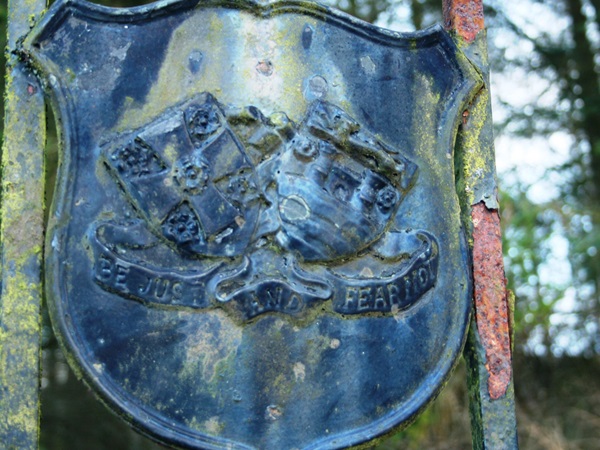 It takes about 50 minutes to walk around the reservoir today. A pleasant walk, and you might see deer, red squirrel and plenty of ducks and geese on the water. But look around the reservoir and there are clues as to who built it. The badges of Be Just and Fear Not lurk on weathered metal moulding.  As many will know, that municipal plea for honesty, integrity and courage remains the motto of Carlisle City Council (as well as its city’s football team). This reservoir was built by the fathers of the city which lies just ten miles away in a westerly direction. It was they – the Carlisle Corporation as it was known then – who decried at the turn of the century that their growing metropolis demanded better, more reliable, purer water. And it was the aptly named Water Committee who were to argue, debate and finally agree to build “the greatest undertaking upon which the city of Carlisle had embarked.”.

The Stoneyholme waterworks, which comprised a pumping station, together with filter beds next to the River Petteril, had sufficed from the 1860s (those who follow Carlisle United will know that one end of the ground is still called “the waterworks end”).

But as time went by, it was clear that the Carlisle Corporation wasn’t very satisfied with either the quality or the quantity of water being supplied. 3 potential options were suggested:

To cut a long story short – rebuilding Stoneyholme was thought to be short sighted, pumping water out of the Eden was seen to be too expensive and there were fears about the water quality too – so Geltsdale quickly became the front runner. And so on October 6th 1897, the Water Committee put forward to the Corporation that the Geltsdale plans should be chosen – estimated at a cost of almost £130,000, with repayments spread over 50 years.

Having been approved, the necessary Parliamentary Bill was promoted, authorising the abstraction of water from the springs and rivers in Geltsdale, to construct a 180 million gallon reservoir at Castle Carrock, with adjacent slow sand filters, to lay a 20inch diameter pipeline from Geltsdale to Castle Carrock, and to lay a 16inch water main from Castle Carrock, flowing westwards to Cumwhinton where a 5 million gallon covered service reservoir was to be constructed. Finally, it allowed the Corporation to lay a 21inch main from Cumwhinton to supply the city and the immediate surrounding area of approximately 40 square miles. Engineers and contractors were chosen in 1903, and work finally started on the first phase in Geltsdale shortly afterwards, with work beginning on the filter beds and actual reservoir in Castle Carrock in 1906, to be officially opened on July 22nd 1909. The waterworks were to be the only source of water supply for Carlisle and the surrounding area for the next 55 years. 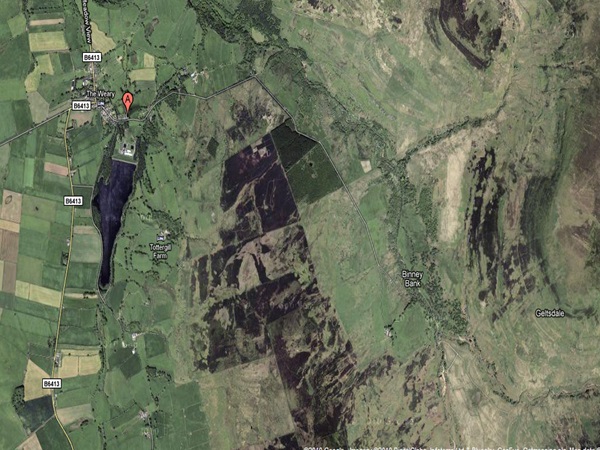 The reservoir is shaped like a giant footprint striding northwards. 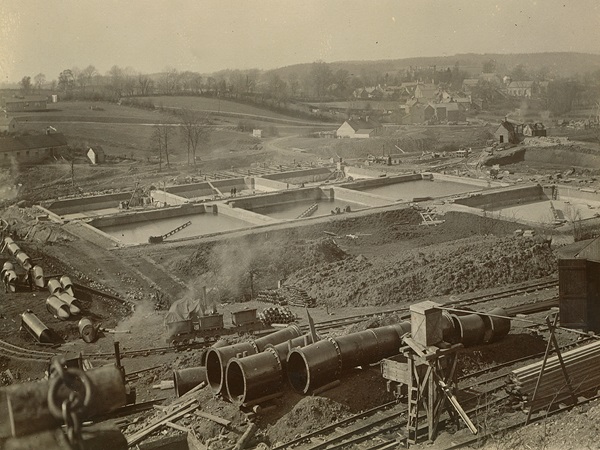 Special railway tracks were laid to carry supplies and men to carve out the track for the water pipe and to blast the rock. Kuroki and Swansea were the names of the two engines. One was used in Geltsdale. The other at the reservoir site itself. 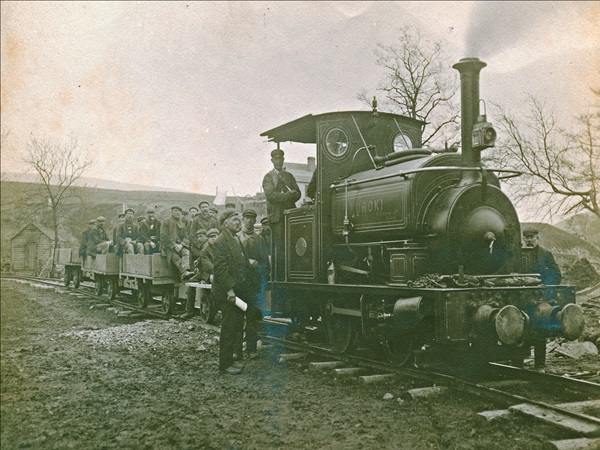 Castle Carrock was certainly a different place from the village we see today – and evidence of the impact of the 700 navvies who worked on the project for 6 years is everywhere. The records for the parish church, St Peters, show that between June 1907 and May 1909, 23 babies were baptised. 16 of them had fathers who were involved in building the waterworks, ranging from a ganger to an engine driver to a simple labourer. There were four marriages at the church between May 1907 and January 1909. Three of them involved men from the waterworks.

Hundreds of clay pipes like these ones were found for years after the building work had ceased. 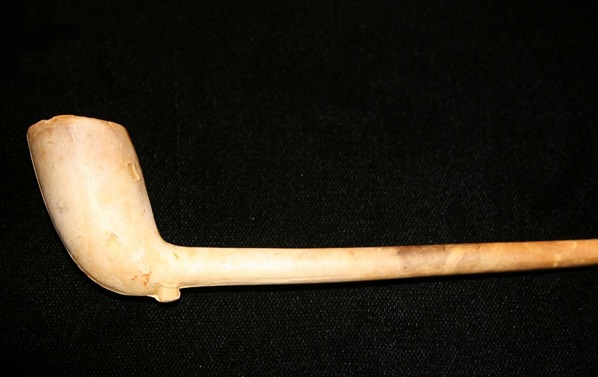 Muscle, mud, mighty manpower.
What lies beneath is the work of men
Equine neighing, rail straining
Kuroki and Swansea descend.

Chance for a moment of peace.
A clay pipe is lit, tobacco sweet,
Thoughts turn to Ireland, lightheaded reflections
Inhale the smoke as a treat.

As a wagon of rocks trundles by
It tumbles out of his hand
It settles, caught fast, slipping out of view
Its journey to now is began.

Kicked hard by hob nailed boots
Sinks into the soft puddle clay
Lost amidst cursing and swear word
Cocooned in an earthy way.

The pipe small chipped but all whole
The tiny bulb, its tube still intact
Resting quiet no smoke no more
Now against it, water laps.

Commonly discovered years ago,
Not special but typical, pipes like these
In the quarry and on the slopes
Midst the brambles and the trees.

And now it rests quite still
Quiet amidst weed and wet leaf
A reminder of manpower, muscle and mud
A memory of what lies beneath. 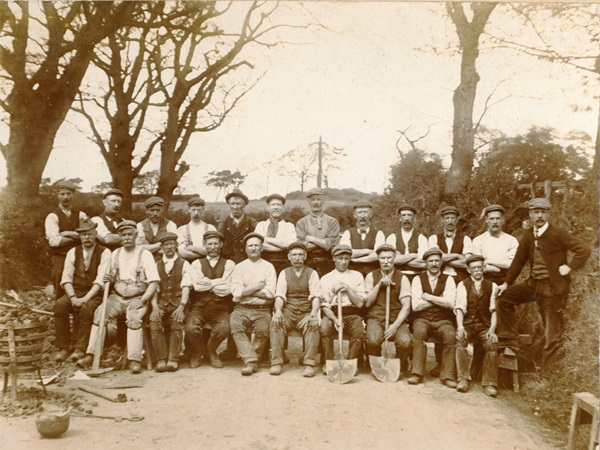 Temporary living quarters would have been built, almost certainly in a camp next to the reservoir, probably on the eastern side in the area now covered by trees. It’s likely there were 40 men to a hut. “Double banking” would have been common. Rumour has it there were 12 pubs in the village. 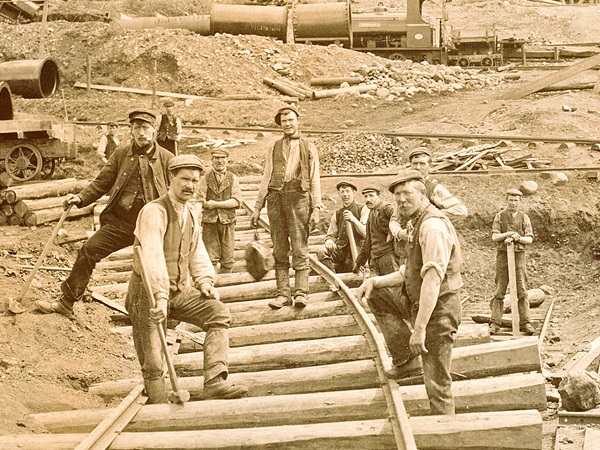 On the reservoir site itself, a 1,100 foot long ropeway, driven by an engine known as a jenni, was used to bring down stone from the nearby quarry, across 5 spans. One worker was paid 6d an hour just to keep it running.  The descending stone was tipped out at the foot onto the crusher stage, and fed into the crusher and concrete mixer. Cement was brought in from How Mill station. A huge cement shed was also built. Another short line transported rock and stone from the quarry above the eastern side of the Reservoir, using a pulley system with a small engine. It is still possible to see the cut in the quarry where the pulley was housed, and an old piece of rail still sticks out of the ground there today. 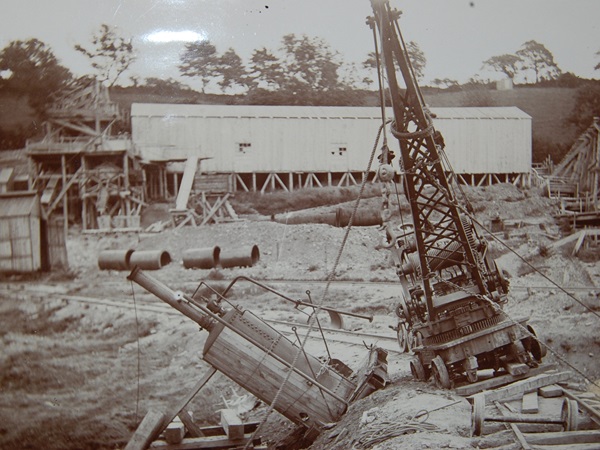 Things didn’t always go to plan. There were major problems building the main dam. Frost and snow in the winter of 1906/07 held back work in digging the trench, with major slips occurring and plans having to be made for unforeseen continuous pumping out of leaking water from January 1906 until at least September 1907. 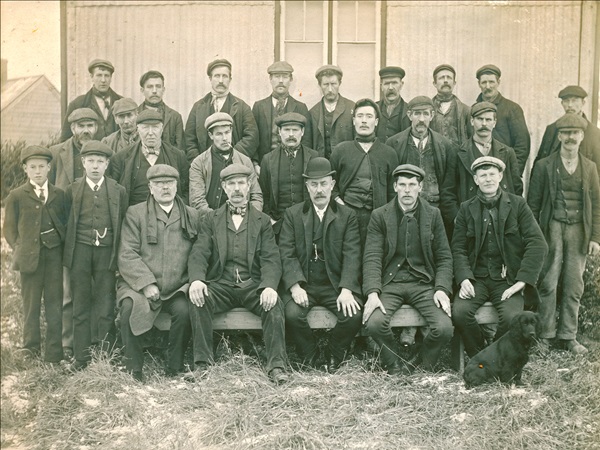 Most of the navvies were probably from Ireland, moving from one big project to another as word of new work came along. 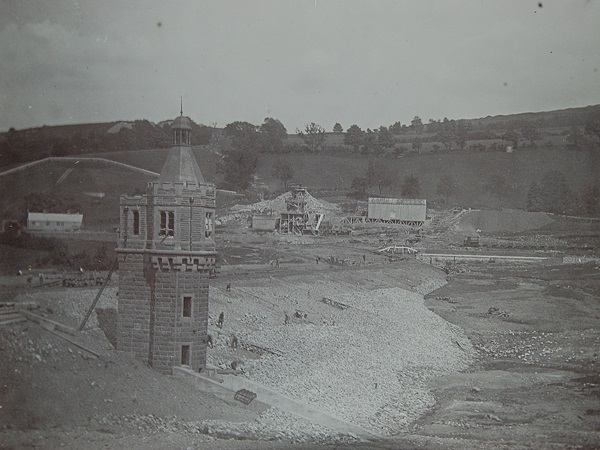 The Geltsdale waterworks were initially been brought into operation on August 16th 1906 after the completion of the intakes in Geltsdale, the pipeline and the filter beds. Purification was originally by seven slow sand filters, each capable of filtering 300,000 gallons a day. And it was a further three years before the reservoir itself was finally finished and officially opened – on July 22nd, 1909. 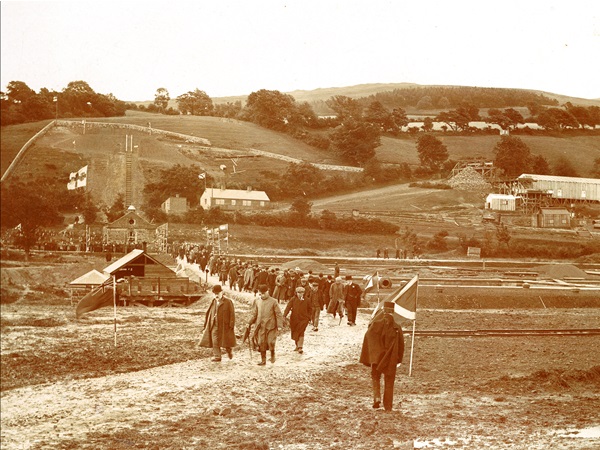 A platform had been erected at the entrance to the girder bridge across to the Valve Tower and speeches were made there. Events were presided over by Sir Benjamin Scott, the Chairman of the Geltsdale Water Committee, who had driven the whole project through. The Mayor of Carlisle, Mr W B Maxwell, entered the Valve Tower and raised one of the valves to allow water to pass under the dam to one of the filters – which was greeted by loud cheers. A flag was raised to signal success. More than 150 guests were there – the great and the good of Carlisle civic society.

It had taken 12 years of argument and planning, almost a quarter of a million pounds, and the labour of seven hundred men. But at last, the city of Carlisle and its surrounding area had a revolutionary, ready and reliable water supply fit for the start of the 20th century. 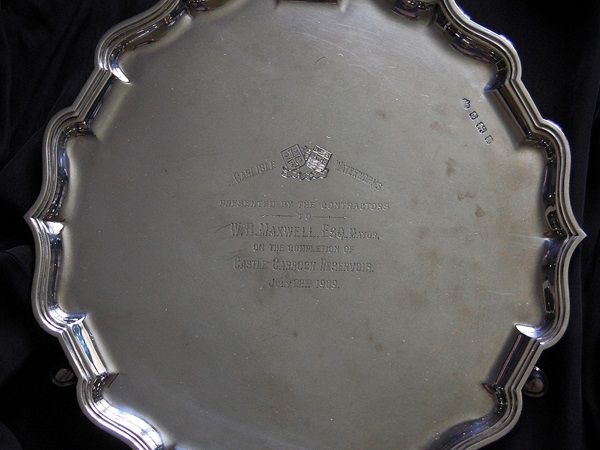 Finally. One of the nicest outcomes of my research was to track down this beautiful, solid silver plate – about 12 inches round – which had been presented to the Mayor of Carlisle, Mr WB Maxwell, by the engineers on the completion of the Waterworks. I knew a plate and a rose bowl had been handed over but I only tracked down this one.  It turned out that it belonged to Margaret Carr, part of the famous Carlisle Carr family, who was the grand daughter of Mr Maxwell. 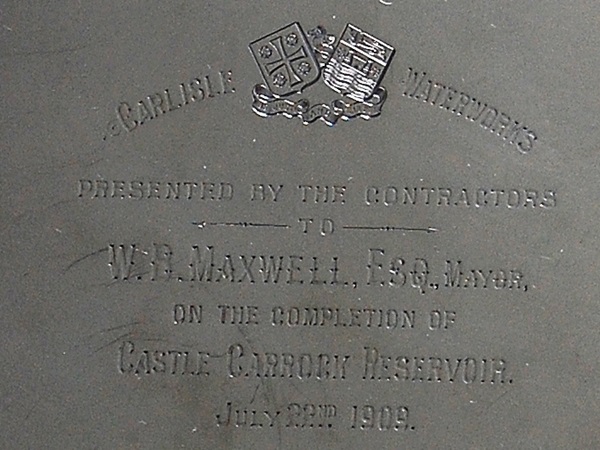 The village of Castle Carrock has always been a special place. But when the waterworks was built, all the way from the Geltsdale intakes to the pipeline to the reservoir, there were no cranes, no diggers, no computers. Let alone a calculator, a mobile phone or satellite imaging.  It was a remarkable achievement. The impact on village life must have been profound – some good, some, no doubt, perhaps not so good. But the reservoir has blossomed. It’s spawned an abundance of wildlife habitats and a wonderful environment to explore and enjoy. A wonderful byproduct. The waterworks still work. We are all beneficiaries of it. It has stood the test of time. 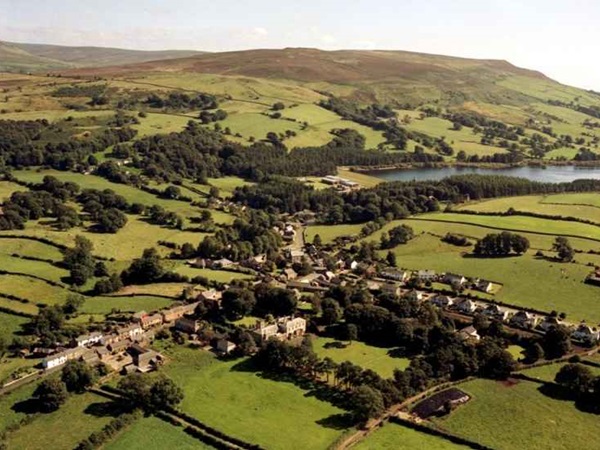 ‘The Reservoir Story’ is a performance piece about the building of Castle Carrock reservoir, delivered by Tom Speight and Ian K Brown – you can watch it here.