Plugging the Gaps was a two year project to boost the number of rare wildflower meadows in the North Pennines AONB and UNESCO Global Geopark.

The project was led by the North Pennines AONB Partnership and funded by the Heritage Lottery Fund. We were able to work with communities to help restore this incredibly important habitat, which has been in serious decline since the 1950s.

Volunteers from various groups, including schools, smallholdings and local organisations, were trained to carry out conservation activities. They collected wildflower seeds from roadside verges and wildflower-rich meadows, propagated these seeds over winter and then planted out the year-old plug plants into upland hay meadows and local community spaces. A wildflower nursery was developed with the help of local communities, which created a growing space to look after wildflower plug plants. 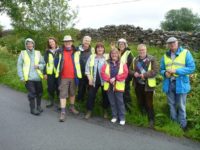 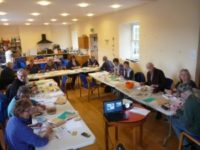 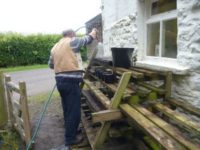 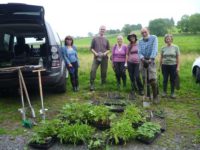 During the summers of 2017 and 2018 around 140 people expressed an interest in the project and many of these were involved in the seed collecting days, where participants learnt about a variety of techniques used to collect wildflower seeds from the most flower-rich places in the North Pennines. We focused our seed collecting effort on the iconic North Pennines wildflowers such as wood crane’s-bill, globeflower, melancholy thistle, Lady’s-mantle and great burnet. These special flowers have been disappearing from our landscape – our Hay Time and Nectarworks projects also focused on the decline of botanical diversity in upland hay meadows.

During autumn of both 2017 and 2018 seed sowing workshops were organised where participants learnt about a variety of techniques to clean and sow wildflower seeds. Participants were trained in seed sorting, seed storage, seed propagation and germination requirements.  We discussed the use of different types of seed trays, pots and types of compost and participants learnt how to look after wildflower plug plants.

During the winter 2017 and spring 2018 many volunteers looked after the  plug plants in their own back gardens, to ensure we had a resource of wildflowers to plant out in the autumn of 2018.

By April 2018 the wildflower nursery was under construction at the old Allendale First School playing field in the centre of Allendale Town. We used the funding from the Heritage Lottery Fund to buy a polytunnel, shed, fencing, plastic mesh, a watering system and tools.  Much of the labour was provided by our volunteers and the wardening team was drawn from volunteers too. The long hot summer of 2018 meant a great deal of plant care was needed.

During summer 2018, sites were surveyed to assess their suitability for planting plug plants into. During the life of the project 26 sites were planted with more than 11,000 plug plants.

The year-old plug plants were planted into upland hay meadows, roadside verges and community spaces in order to link up with existing flower-rich sites and create an unbroken network of nectar within the North Pennines.

This project came to an end conclusion on 30 April 2019.  However, it continues to be run as a community-focused project, led by volunteers and supported by an Allendale-based social enterprise.