Focusing on the stars

Focusing on the stars

An interview with astrophotographer, Gary Lintern

I focus on night-time photography and astrophotography mainly because the demand is there but also because I enjoy it. It also fits with my family life, so I am more available during the day to do other things. 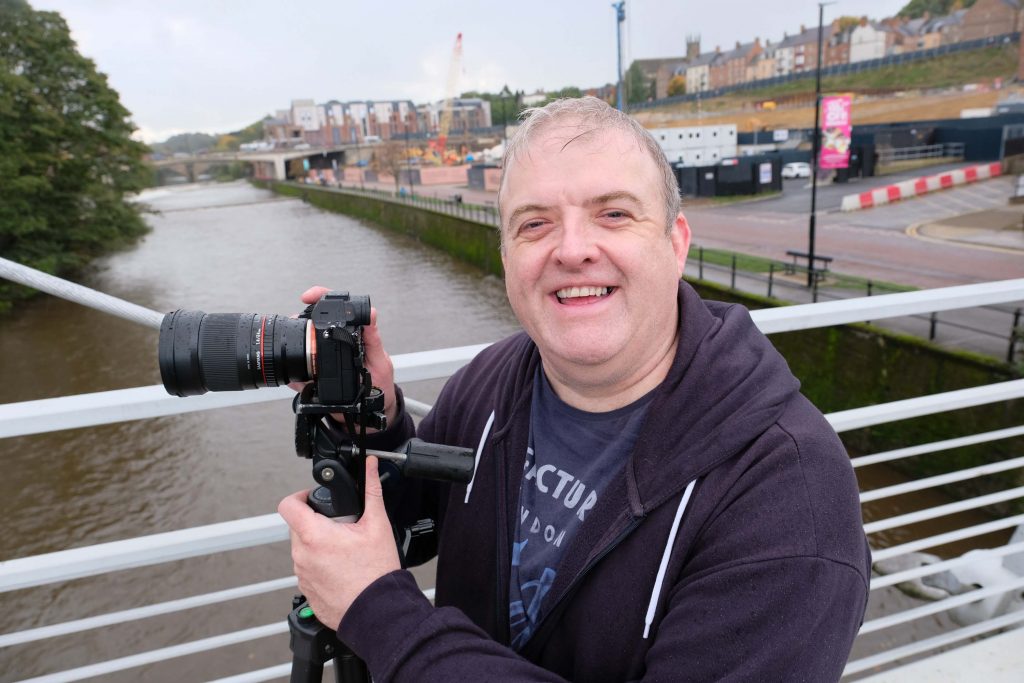 It all came about eight or nine years ago when my wife and I were living in Gosforth and I was working normal hours. I found that I wasn’t really getting out and taking photographs between October and March because it was too dark. It occurred to me that I could go out and take very different shots at night, so I started taking images of cities at night, going down to Newcastle Quayside and travelling through to Durham. When my son was born and I moved back to Weardale, I thought it might have to stop as I couldn’t really afford the time to travel to places to take shots. But then I realised that this was an area I knew well; I’d grown up here and gone to school here. I could take night time shots in the North Pennines. I launched the Facebook page, Weardale at Night, mainly as a personal project, and the idea was to fill it with my own photographs taken in the dark. That progressed into other groups on Facebook around photography and night-time photography, and then a collaboration with the Durham Dales Centre when I started putting on exhibitions there.

The transition into night-time photography was easy. I’ve been into stargazing since I was a child and I had one of the old Ladybird books about the stars. One of my New Year’s goals for a while had been to learn about the night sky. So, I learned more, and once you’re into it, it is so easy then to do a job that connects with what you’re interested in and passionate about. There’s a correlation between the things we find easy and the things we tend to do well. That’s been the key to it for me.

The other advantage was living in such a dark area. It was really easy to get to very dark spaces really quickly. The North Pennines AONB is one of the darkest areas in the country and having pristine dark skies like this on my doorstep makes a big difference.

One of my favourite places to photograph is High Force. At first when I started going there it was also one of the spookiest places to be on my own. Back then I was quite wary of being in fairly remote, dark places on my own, but you do get used to it. Now I’m much keener to seek out really dark places to photograph, where car headlights don’t interrupt the night sky. Occasionally during the first year or two the police would pull over to see what I was doing. That doesn’t seem to happen so much now.

Every year for the past four years I have made sure that I get that one shoot at High Force, when I am the only one there. I’ve been able to capture the shot of the Milky Way lined up with the waterfall, and it has become one of my best-known images. That one chance won’t come around again for another year and each year I set the bar a little bit higher. The general public look at the shot and think it must involve more and more Photoshop ‘trickery’ each time. The truth is that it is less and less, as I become better at setting up the best shot I possibly can. After four years it is actually now a very quick edit, and what you see is more or less what’s in the camera. 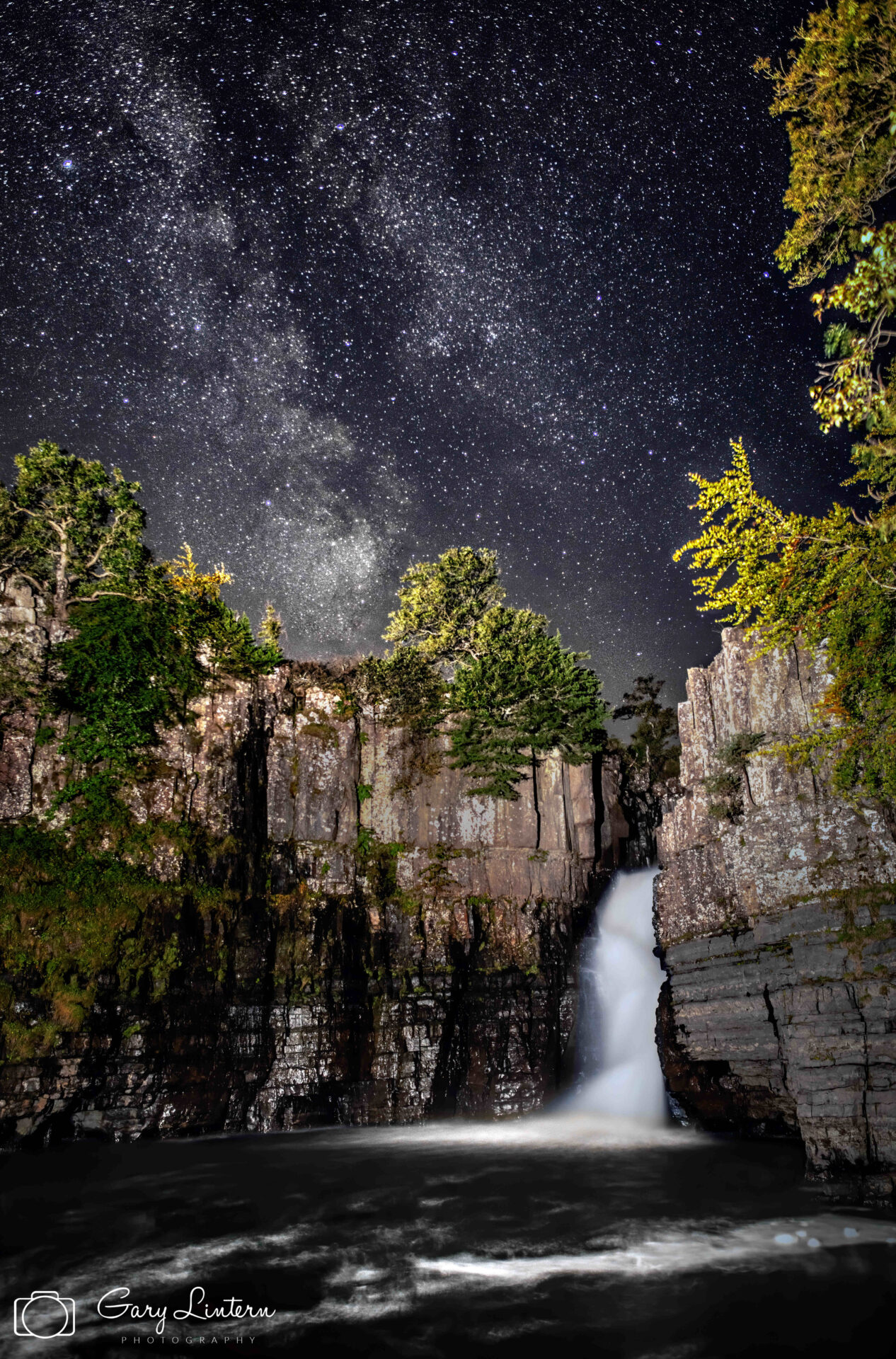 One of my favourite places to run astrophotography and stargazing sessions is at Bowlees Visitor Centre and the area down towards Low Force. There’s always something interesting to photograph every night, even if the skies aren’t always clear. The best places to take night photographs are those with foreground interest, which is why Bollihope is another favourite, with the trees and spoil heaps. I’ve also done some really fun sessions with studio lighting in Weardale and Teesdale where we light the dramatic, quarried landscape like it is a film set. Some of the people on those sessions are taking better shots than I have taken myself.

Now that I am out so frequently teaching, that does mean I am out a lot less taking my own shots. I have found however that I am still learning from other people, and I’ve improved my own work despite not having been out myself. I do find that when I do go out alone, I get a lot done. It is also really nice to get the chance to enjoy the landscape without other people in it. That’s an advantage of all night-time photography! A typical evening / night might involve me trying to fit in as many locations as possible. The last time I went out, I started at High Force around 9pm, moved on to Raby Castle, then some other locations in Teesdale. I then managed to get across to Keswick for some shots of Derwent Water that I had been waiting to get, before coming back to Teesdale again, and home about 4am. It’s about maximising the opportunity. It’s definitely an advantage having so much on my doorstep.

For a lot of people living in Durham, Wearside or Tyneside, the North Pennines will be the nearest point they can come to in order to experience truly dark skies. There are plenty of Dark Sky Discovery Sites where you know it is dark enough, and there is parking and easy access. In all these places, and also in places like Bollihope and Waskerley Reservoir, it is perfectly possible to get some spectacular shots of the Milky Way. You don’t need any specialist knowledge of the stars, just a camera that you can control manually, and a bit of knowledge about the settings to use.