So it’s just after Christmas and New Year has come and gone… this can mean only one thing it’s time for the annual Montane Spine Race extravaganza. This epic, week-long trail running/endurance event consists of two races: the Spine Challenger, which started on Saturday 11 January at 8am, follows the Pennine Way National Trail for 108 miles between Edale and Hawes; and the Spine Race itself, starting on the next day at the same time. Once again I volunteered in the checkpoint team for five days/nights – three days at CP3 (Middleton-in-Teesdale) and two at CP4 (Alston). It’s an uplifting, and at times overwhelming, experience and it takes a little while to process! 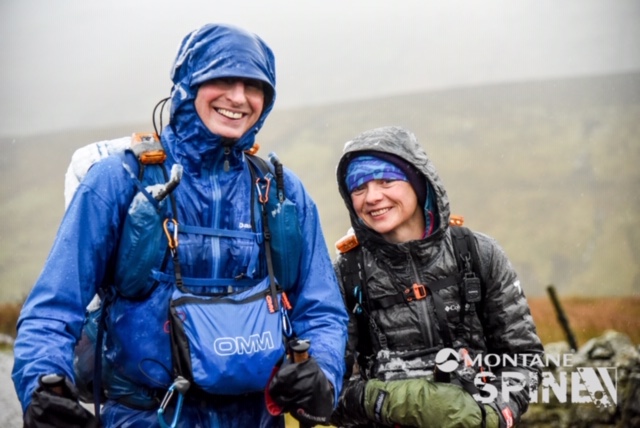 Competitors in the Spine Race have 168 hours (7 days) to complete the entire Pennine Way to Kirk Yetholm – a gruelling 268 miles, making this expedition race one of the toughest in the world. On the way runners will pass through five Checkpoints – CP3 (Middleton-in-Teesdale) and CP4 (Alston) are in the North Pennines Area of Outstanding Natural Beauty (AONB) and UNESCO Global Geopark. Runners enter the North Pennines at the famous Tan Hill Inn and leave it some 70 miles later just south of Hadrian’s Wall. 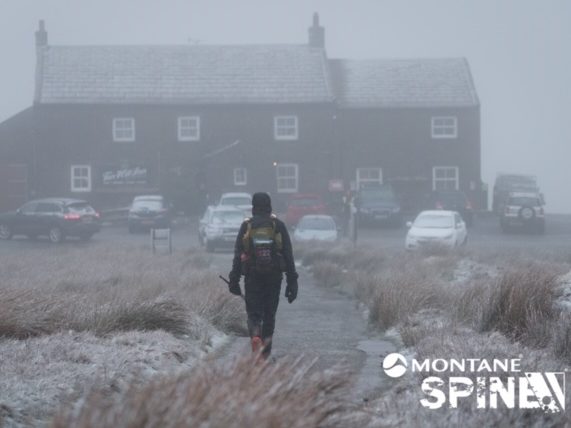 Some of the most iconic sections of the Pennine Way are in the North Pennines – Low Force, High Force and Cauldron Snout waterfalls in wild and windswept Upper Teesdale, the stunning, U-shaped, glaciated valley that is High Cup Gill and the famous High Cup Nick, so-called ‘Grand Canyon of the North’ and of course the mighty Cross Fell – the highest point on the Pennine Chain at 893m / a touch under 3,000 feet at 2,930. 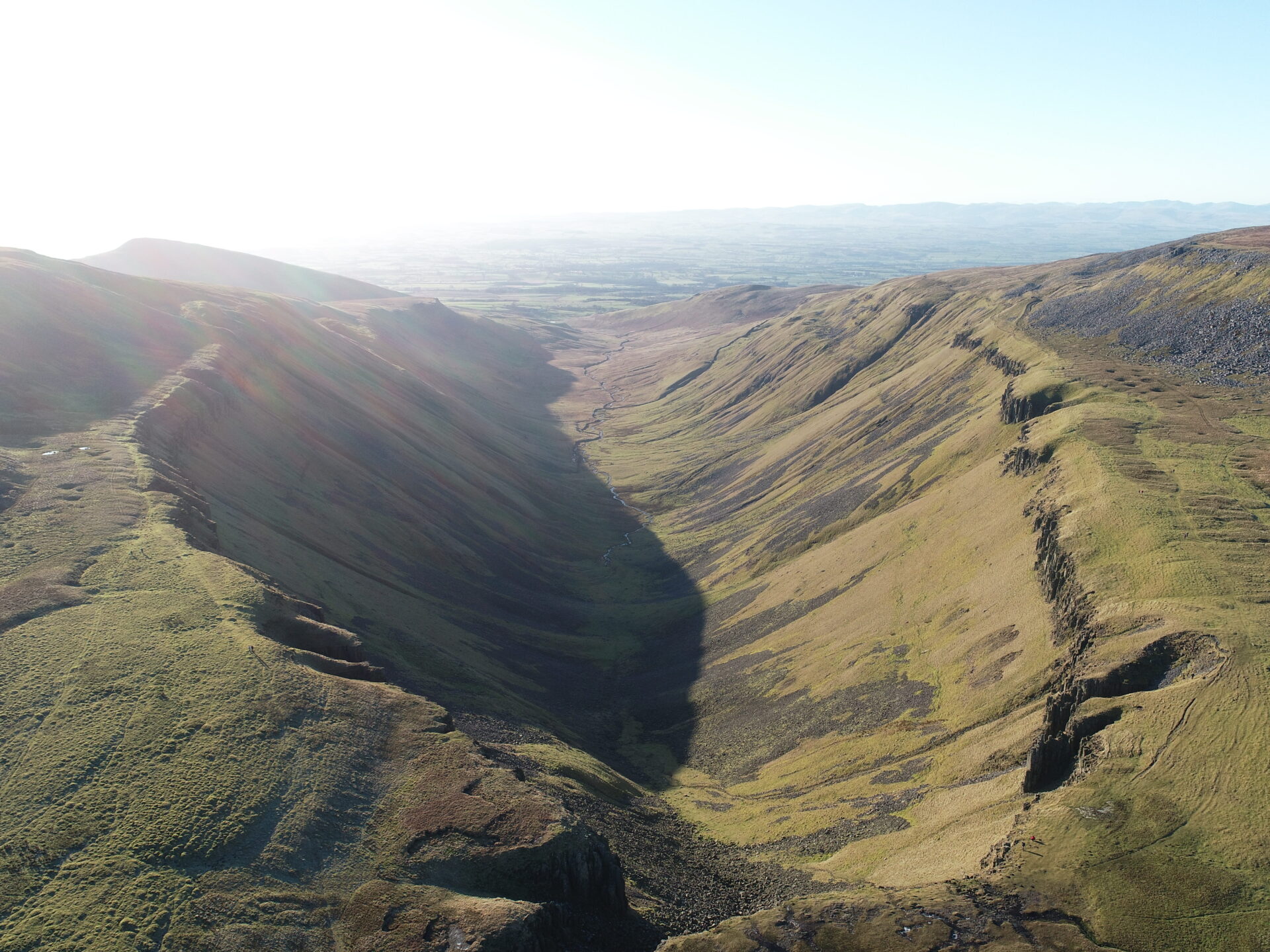 Putting on a race of this length and duration over terrain as wild and unforgiving as the Pennine Way in winter is a massive undertaking. There’s a huge army of volunteers working tirelessly behind the scenes with one, shared, goal – to hopefully enable each and every runner to fulfil their dream of completing the Spine aka ‘breaking the Spine’.

Four teams work in an interconnected way to fulfil this endeavour: Checkpoints; Safety; Medics; and Logistics. Checkpoint teams run five checkpoints along the trail (at roughly 40-50 mile intervals) i.e. Hebden Bridge, Hawes, Middleton-in-Teesdale, Alston and Bellingham. Here runners have access to beds, their drop bags, food and drinks and medical care. It’s the job of checkpoint volunteers to check runners in and out, feed them, assign beds and generally help runners out. Spine Safety Teams (mostly mountain leaders and members of Mountain Rescue Teams) rove along the trail sorting any issues out, carry out kit checks and run monitoring points – basically keeping everyone safe. Medics are a critical element in the overall operation – providing advice and care to runners at checkpoints and out on the trail with safety teams. Logistics teams keep everything moving north – not least drop bags which runners have access to at the five main checkpoints. Also the HQ Team at The Sill on Hadrian’s Wall co-ordinate and are in essence the safe port around which the race revolves.

Working as a volunteer in the checkpoint team feels like being a small cog in a massive machine with a single overriding purpose – for a week you’re in the ‘spine bubble’, larger life worries fall away and are all-but forgotten in the midst of immediate tasks e.g. checking runners into checkpoints, making sure they’re OK, making them a well-earnt brew, taking food orders, preparing meals, moving drop bags around and a multitude of other tasks. It’s tiring but rewarding and you make friends fast – both fellow volunteers and the runners themselves. What you do outside of the bubble is unimportant. It’s a life affirming experience. All that matters is making sure that the needs of runners are met. Many (if not all) of the volunteers are ultra runners, or aspirant ultra runners. They’re here to put something back – perhaps they’ve been on the start line of the Spine or Spine Challenger in the past or are trying to decide whether they want to put themselves on the line in the future. 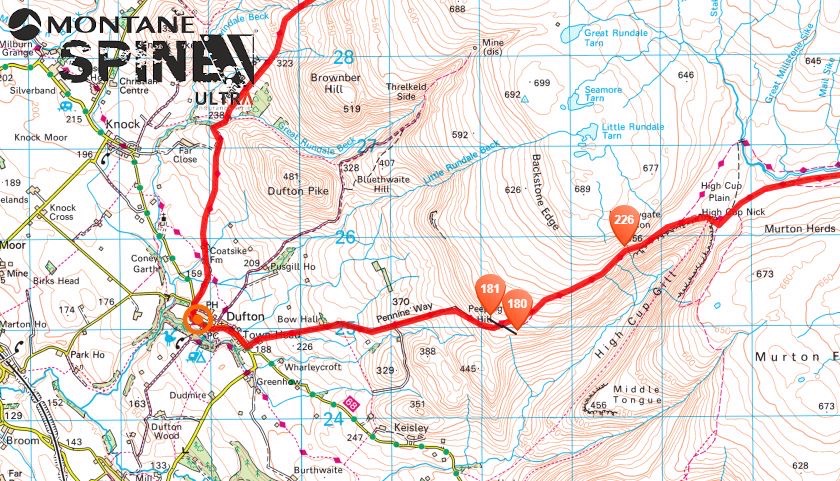 The sharp end of the 2020 race was an exciting one. Ultimately John Kelly (USA) won in a new men’s course record of 87 hours, 53 minutes and 57 seconds. John virtually led from the off – in checkpoints he was focused, a man of few words, and he shunned sleep! A chasing pack pursued him relentlessly but eventually fell away, notably Jayson Cavill (retired after 241.4 miles) and Eugeni Rosello Sole (retired at 198.2 miles). Eoin Keith was second (again) in just over 100 hours – as ever he ran his own race – a deeply impressive, self-aware performance again from Eoin. First woman was Sabrina Verjee (British) – she led from early in the race, arriving at Kirk Yetholm in 108:07:17. A determined performance from the winner of the Montane Spine Fusion race in June 2019. 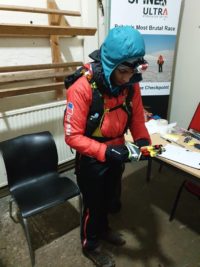 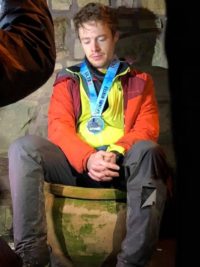 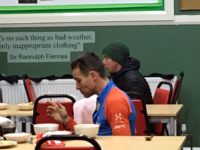 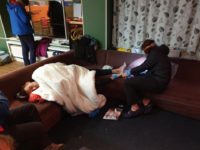 My week in the checkpoint team rushed by in a whirl of tasks – I slipped into a nocturnal existence, working through the nights and catching ‘sleep’ during the days. Often I was on the ‘meet and greet’ teams – I like that end of things. Collecting runners, welcoming them to the checkpoints, assessing how they are, checking them in, sorting gear to dry, getting them hot drinks to revive, explaining the checkpoint layout – where everything is, what’s on the menu etc. Then later checking them out again, offering encouraging words, sending them out again into the weather and the night. Moving as I did between CP3 and CP4 on the Wednesday is nice because I got to see some of the same runners 43 miles later after they’ve gone up Teesdale, across to High Cup Nick, down to Dufton, up and over Cross Fell, Greg’s Hut , Garrigill and the riverside run/walk alongside the South Tyne River – it’s great to welcome them to both checkpoints – often they remember you and it brings some continuity to both our Spine journeys. 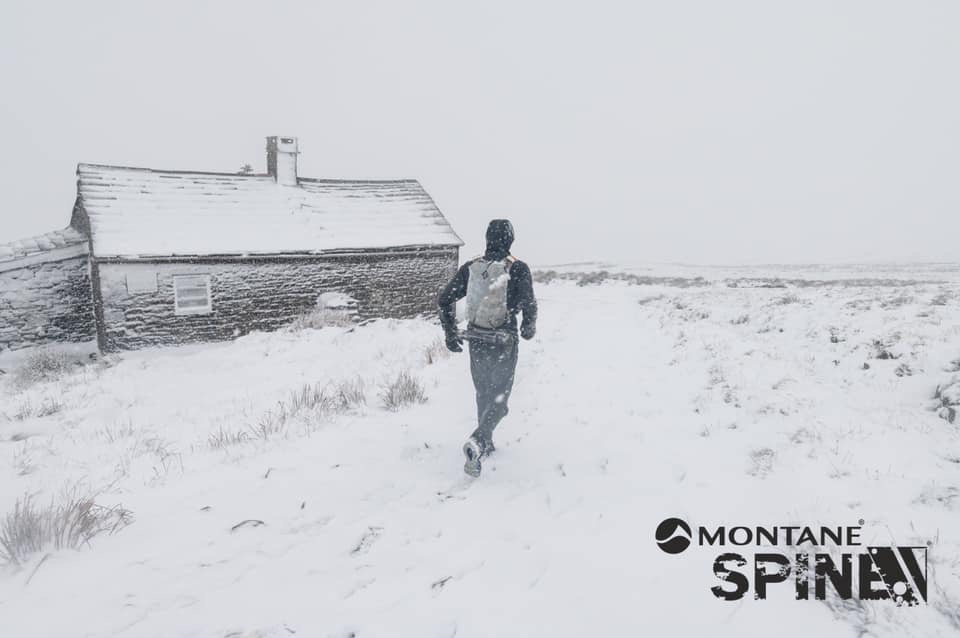 The attrition rate this year was 57% – of the 147 runners who toed the start line in Edale – 63 kissed the Border Hotel wall in Kirk Yetholm and took a medal home, this gives an indication of the harshness of this race. But anyone who had the courage (some would say daftness) to put themselves out there for either the Spine or the Challenger has my respect. The dedication that each and every one of them will have shown in the long months of training just to get to the beginning is quite something in and of itself. The races themselves are just the last legs of their Spine journeys. 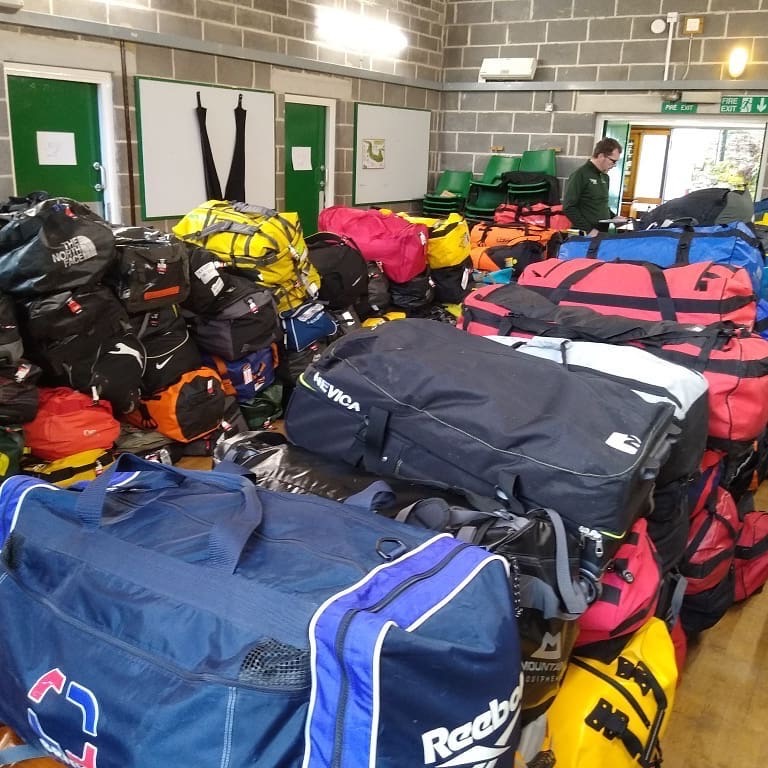 Do I want to have a crack at this race? The jury is most definitely out on this one. When I first volunteered in 2019 I mostly did so because I’d been dot watching for a few years and wanted to be properly involved and there was also a sense of wanting to welcome runners to, and help them through, ‘my patch’. I’ve been running ultras for a couple of years and I’m gradually tackling longer, harder races and gaining experience along the way – I’ve a background in mountaineering and Munro-bagging (I completed in 2009) so on the face of it I could have a go, I’ve some of the skill set required. But I don’t know whether I’ve got what it takes for the full Spine – what volunteering has shown me is that you’ve really got to want this one. It’s going to hurt. It’s going to hurt a lot. This race is completed/not completed principally in the head. Yes you need to be fit. Yes you need to have the right gear. But more than that you’ve got to have a single-minded determination and a willingness to just keep moving forward in often atrocious weather – it’s not labelled #BritainsMostBrital for nothing. For now I’ll just keep volunteering on the race and gradually building my experience and see where the journey takes me. Never say never! 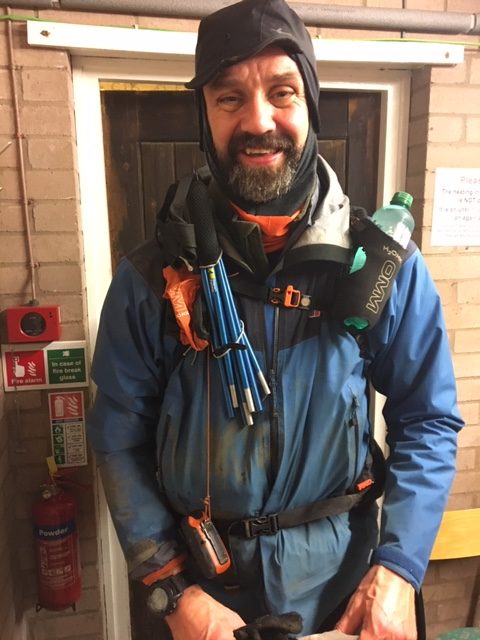 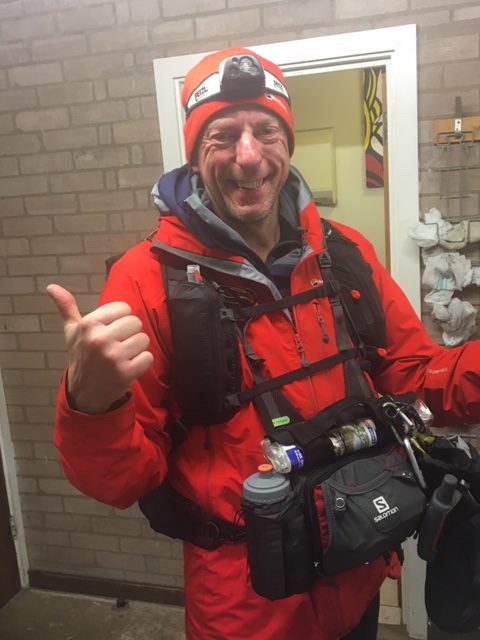 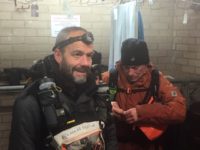 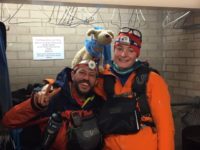 So I rounded off my Spine week with a ‘short run’ of my own at the North East Marathon Club’s 6×6 event at Hardwick Park, near Sedgefield. It couldn’t really have been more different, for a start it was only 26.2 miles and it was on hard packed paths/tarmac, mostly flat and the biggest hazards were avoiding dog walkers, families out for a Sunday afternoon stroll and flocks of geese and swans – rather than endless bogs, windchill, fog, ice-covered paths and 70-mile-an-hour winds! But it seemed like the right thing to do – I’d say it was a bit of a struggle what with the sleep deprivation I was suffering from a week of ‘nights’ with disturbed snatches of sleep during the day time – but every time I wavered and thought about giving up I reminded myself that compared to what the Spiners had put themselves through it was a mere warm-up bimble… in the end I managed my marathon in just under 5 hours, which under the circumstances I was pretty pleased with… #JustKeepRunning #KeepOnKeepingOn #ForwardsIsForwards 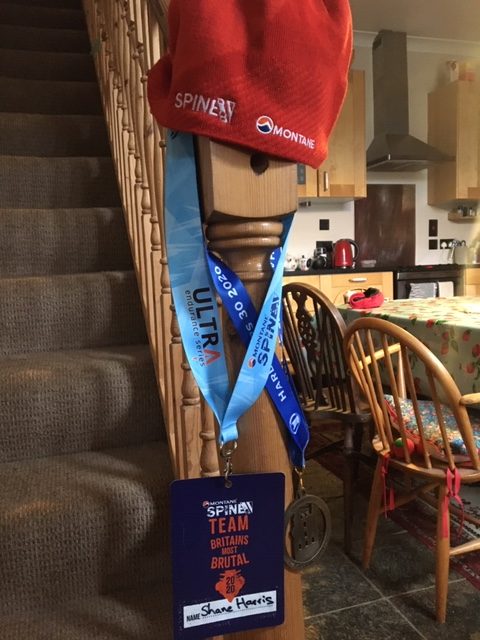 Will I volunteer again? You bet I will – I’ve already put my name down for January 2021. Wouldn’t miss it for the world 🙂