Skip to content
An unexpected evening with the Northern Lights

An unexpected evening with the Northern Lights

An unexpected evening with the Northern Lights

In my experience the best things in life come long unexpectedly. And that is certainly true about my life-long passion with astronomy. You can plan observing sessions until you have maps and lists coming out of your ears. But it’s that fabulous shooting star arching across the sky, or a glimpse of the brilliant Milky Way between the clouds that really takes the breath away.

A great example is a magical night in Teesdale back in 2015. I was at the North Pennines AONB Partnership’s visitor centre at Bowlees doing a talk on dark skies for tourism students from Sunderland University.

I was in my element. Do you know, I asked the audience, the North Pennines has the darkest skies of any mainland AONB in Britain? They didn’t. And that means we see a couple of thousand stars overhead instead of a miserly handful from light polluted cities. That was my cue to show pictures taken under these transparent skies, which caused an audible intake of breath. For anyone living under a permanent fog of orange or increasingly painfully bright LED lights, the starscape we take granted here is a beguiling, but alien sight.

At that point my phone issued a strange beep and during a break in proceedings I saw that my aurora prediction app had issued me with a red alert for the Northern Lights at my location. I’d never seen one of those before and Mother Nature could hardly have been kinder – not only was I in a dark place, but the weather was clear and moonless.

Once the students had headed home I packed away my stuff and shot up to Langdon Beck Hotel to grab some food. There I asked the lady behind the bar if she’d ever seen the Northern Lights. “Noop, you can’t see them from here,” she replied.

After polishing off a bowl of stew I drove a few miles north and pulled off the Alston road at the ruins of an old farmstead. Out came my camera and tripod and then I waited to see what would happen. Perhaps it was a false alarm, after all the Northern Lights are an elusive phenomenon, caused by a vast plume of energetic particles being blown out by the sun. If the plume comes in our direction it encounters the Earth’s magnetic field, which is somewhat weaker at the poles, so it’s here we get a light show, sometimes extending down to our latitude.

But as the temperature dropped the science of all this was the last thing on my mind. Were we going to get a display, or not? After a short while I began to convince myself that the northern horizon was brightening a little as if someone had plonked a new town there with all its street lights. Then very subtle columns of light began to shoot up. Within 30 minutes I began to pick a tinge of green in the sky and then the columns became much brighter and shot overhead. A display of Northern Lights is a bit like a rain show – it starts slowly and eventfully peaks before dwindling away. But this can take place over a few hours, so you have to be patient. At its height my eyes were also seeing red tints and it looked utterly beautiful. No this was not the kaleidoscopic light show you see on documentaries about trekking through the Yukon, but it was obvious, delightful and magical. And what’s more it was all happening above the North Pennines, a place I know and love. I happily clicked ways with my camera and I could see from the Live View it was picking up even deeper colours. I almost opted to go back to Langdon Beck to tell the lady to look out of her window – definitive proof, you can see the Northern Lights from here! 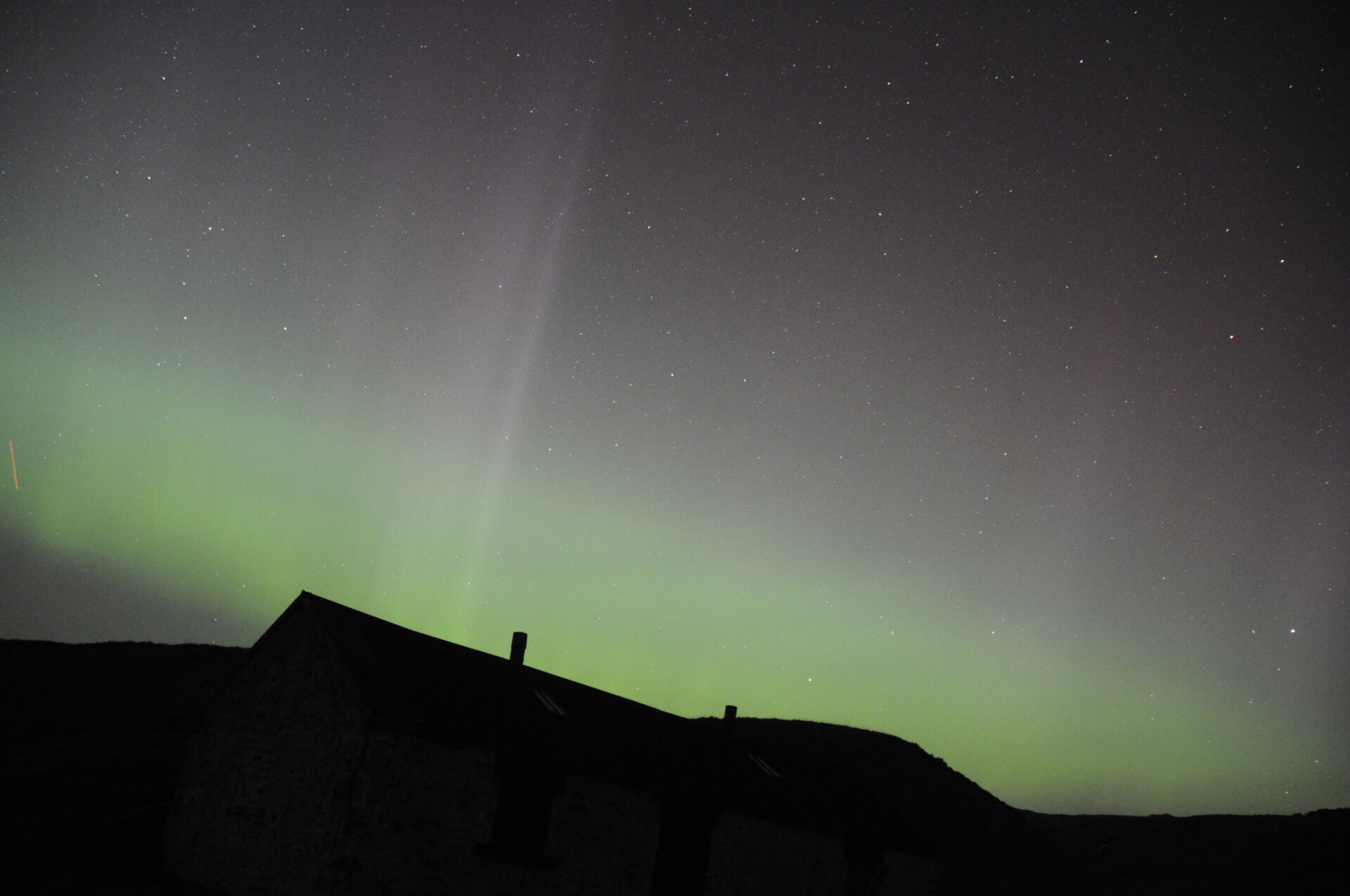 Back home I could not resist downloading the pictures – the first I’d ever taken of the aurora – and at that point I vowed not to Photoshop the results too much to make them garish and heavily saturated. Rather I wanted to portray the more natural and exquisite display I witnessed.

I was not the only person to image the aurora that night. This kind of very strong display comes along at the rate of a really good one every few years. When the sun is more active you would expect to see more and we are now on the upswing in the solar cycle. A decent app – try My Aurora or Aurora Watch UK – makes all the difference alerting you that a display may be seen. The key thing is to go somewhere dark and with a good view of the northern horizon.

Nights like this are stored up in my memory and make cloudy weather more bearable. It’s what keeps me coming back to the North Pennines – a place to cherish in the night as much as the day.